I’m writing this post from my sick bed (ie. duvet on the sofa in front of the footie). Once again, I’ve gone and contracted the winter lurgy (in spring), and I’m currently drowning in tissues full of…

What I am not currently full of is stories, which is seriously frustrating because I need to write three in the next two weeks to meet a competition deadline.

Which is probably the issue.

But anyway, to get things moving I’ve been up to the study and grabbed this little beauty: 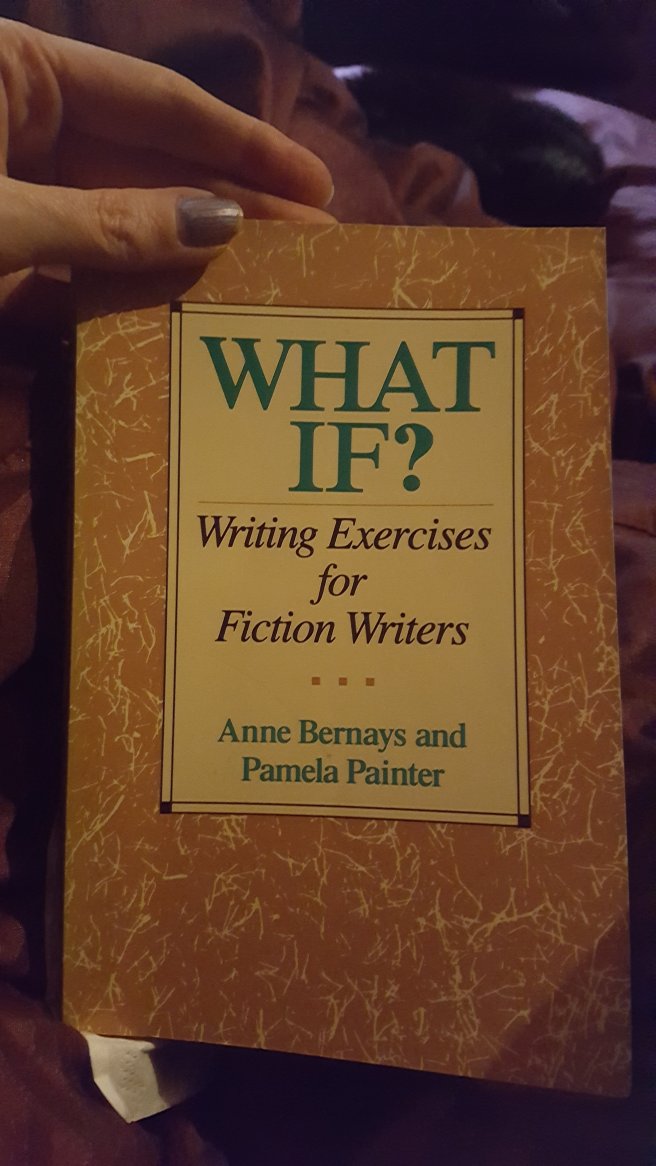 (Yes, that’s Welford curled up in the background, keeping me company / pinching all the leg room, and oh look! A tissue!)

I opened the book at random and came to the following exercise (easier to photograph than explain since I’m typing this on my phone – I’m not being lazy, honest!): 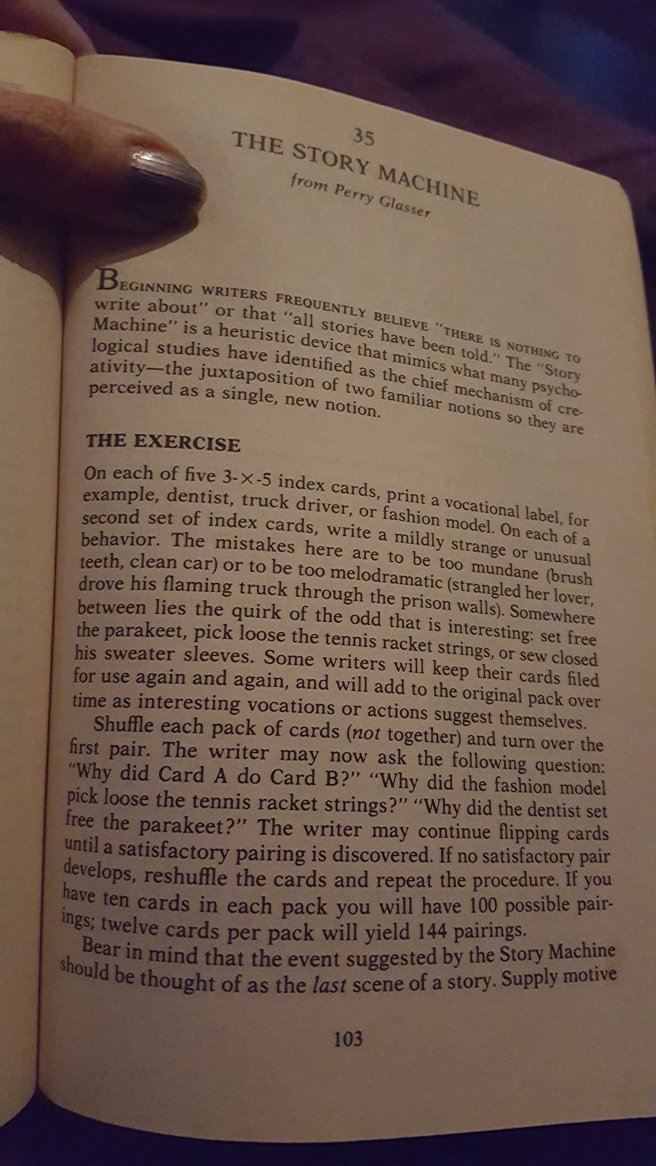 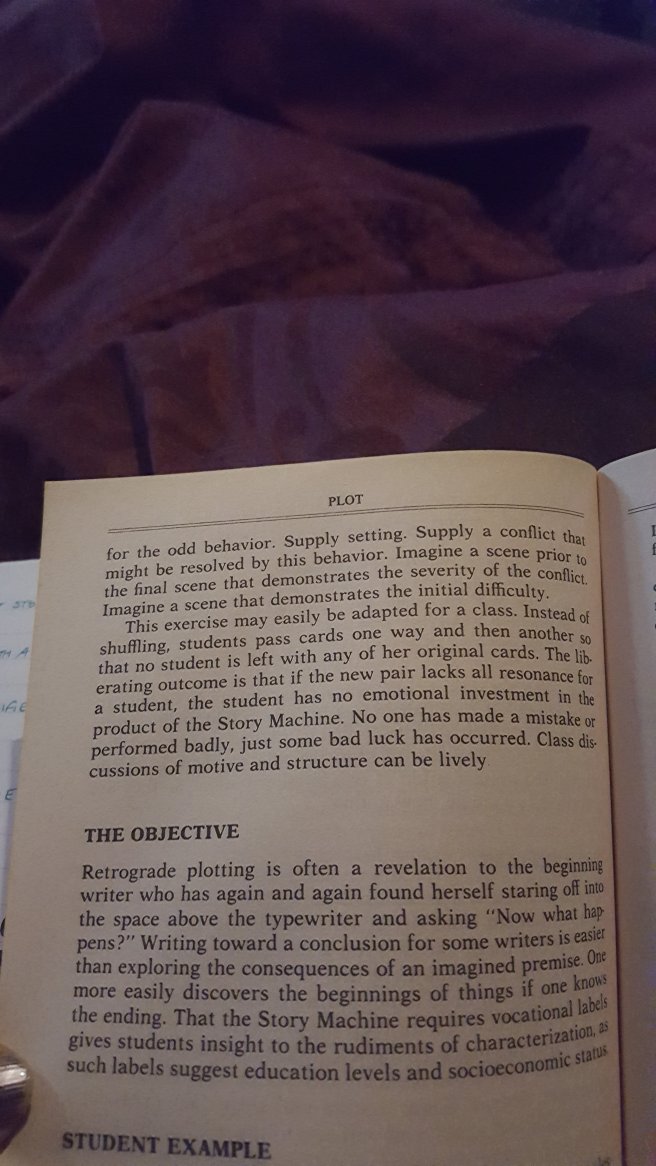 So I’m going to give it a go and see what I end up with, and if I’m feeling brave then I’ll post the results – whatever they may be 🤣

Just a quick shameless plug for The Case of Blue Ben, the 4th instalment in the Riley Pope Case Files, which came out last week and can be downloaded for free (along with the first three books in brand new revised editions) from Smashwords in epub or mobi format now. 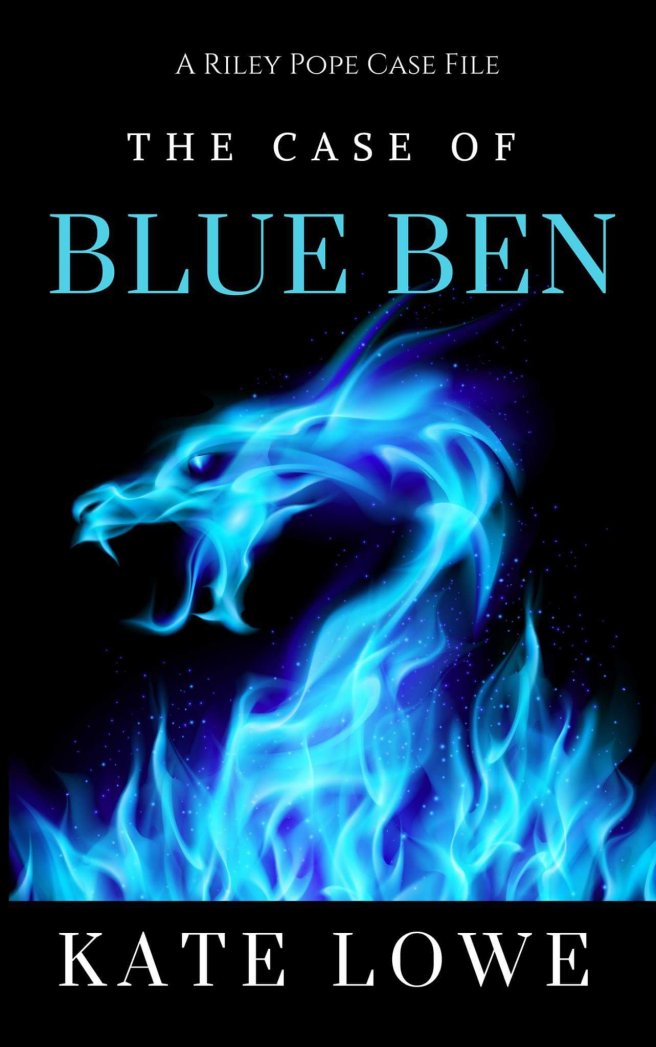 I’ve just had a pretty mad weekend of reading – it’s rare that I have (or find) the time to spend an entire day reading, but yesterday, apart from a bit of housework, I essentially sat on my arse and power read.

First, I finished the second half of the Mercy Thompson book, Blood Bound. Then I started The Girl on the Train… and by midnight I’d finished it.

Like I say, it’s rare for me to spend so long immersed in a book, so I wasn’t expecting to feel the way I did this morning, which was weirdly disconnected and just not ‘with it’.

I can’t put it down to anything obvious. I don’t feel ill and there’s nothing beyond the usual on my mind, I’m not drunk and I’ve never taken anything stronger than a paracetamol in my life, so I can only put this weird disconnected feeling down to the fact that I spent a good eight hours emersed in the worlds of Patricia Briggs’ Tri Cities werewolves and then Paula Hawkins’ screwed-up trio of Rachel, Megs and Anna.

Does anyone else suffer this or is it just me? What can we call it? A book hangover?

Anyway, I did something unusual and reviewed both books on Goodreads (check out my feed to see what I thought, and don’t forget to follow me!). I don’t normally leave reviews because I tend to forget half the good stuff but always remember the bad, so for my next book I’ve decided to make notes as I go along and see what I end up with, because I’m sad like that.

Writing-wise, I’ve just written a 7500 word paranormal romance (it wasn’t meant to be a PR but the story just took me in that direction) so I’ll get it polished then see if I can place it somewhere. The WIP is still being pulled into shape and I’m picking up the 4th Riley Pope tomorrow. I have 9 days to go in the day job before I have a fortnight off and two blissful weeks of solid writing, which can’t come soon enough. I’ve also swallowed my nerves and booked the tickets for the Bridge House author event. I’ve no idea what to expect but I guess I’ll worry (excessively) about that in December!

(And don’t forget, my urban fantasy series The Riley Pope Case Files is free to download from Smashwords and ebook stockists everywhere!)

Hello! I’m still here. Working hard on the perpetual WIP (I was struggling with the sheer length of it, and so was Word, so I’m now using Scrivener – not sure now how I ever managed without it!). Two short stories currently in for submission, pending a decision some time after June, and plotting the next Riley Pope tale, ‘The Case of Blue Ben’. Waaaaaaay behind on my Goodreads Reading Challenge so in a frantic effort to catch up I’ve developed Reader’s Neck – don’t know if that’s an actual medical complaint but it should be because it bloody well hurts. I’m currently alternating between Kelley Armstrong’s Cainsville series and Lee Child’s Jack Reacher books. I’m not exactly a fan of this genre of fiction, but I got into the Jack Reacher series after reading a Lee Child interview in Writing Magazine, an excerpt of which can be found here.  The particular paragraph that resonated was this one:

• How do you feel about breaking writing rules?
In general writers, especially beginner writers, are very nervous and insecure. People have a clear idea of what they want to do and there are rules that aren’t rules – they’re just advice, and sometimes bad advice. Showing not telling is one face of bad advice. There is no reason why you can’t tell something in a plain, declarative style. Classic post-war thriller writers just sat down and told a story, and the idea that you should not is very twisted and forces people to pass on information in a very weird way. My main point is always to avoid advice. Books only work if they are vivid and organic and have one imagination in charge.

Always avoid advice?! Unpublished writers are bombarded with advice, and a lot of it is useful and we couldn’t do without it. There’s also advice that’s confusing, conflicting, biased, or just plain unhelpful. Also, if we’re to avoid advice, then do we avoid Mr Child’s advice to avoid advice???

But anyway, I picked up a few Jack Reacher’s on my charity shop rounds and have been steadily collecting them ever since. I’ve struggled with a few – I’d advise anyone to give ‘Nothing To Lose’ a very wide berth – but mostly I’ve enjoyed them, mainly because of the simple, pared-back way in which Lee Child writes; he can conjure the most vivid scene using four or five carefully chosen words, whereas another author (me, for example) might use a paragraph to say the same thing. I’m currently reading ‘The Visitor’ and enjoying it very muchly – I’m pretty sure I’ve figured out who the killer is already but I don’t know how she’s doing it, other than by hypnosis. I’ll add this to my notes on ‘interesting ways to kill people’, just as I added superglue to my list of ‘interesting ways to subdue folk’. I’m pretty sure my PC must be flagged to every law enforcement agency in the country by now.

On the subject of Cainsville, I’m also very much enjoying it. It is, of course, written by my favourite author, so go figure. It wasn’t until I finished #3 in the series and read a few reviews on Goodreads that something was pointed out to me, and verified by a lot of other readers – that love triangles occur in pretty much every Kelley Armstrong series. I hadn’t noticed this myself, but there is certainly a love triangle in Cainsville with Eden/Olivia, Gabriel/Gwynn and Ricky/Arawn, and then there’s the love triangle between Nadia, Jack and the guy whose name I forget in the Nadia Stafford series, and then there’s a potential love triangle issue waiting in the wings in the Rockton series between Casey, Eric and her ex-lover who she left behind when she went into hiding, and may reappear in the third installment to shake things up. The only love triangle I recall in the Otherworld series was in Bitten, when Elena was still living with (Philip?) whilst still in love with Clay and was caught between the two. I haven’t read any of her YA stuff so I can’t personally comment, but I’m led to believe there are more… you guessed it…. love triangles.

Apparently this is something of an overused plot device in YA, but it’s probably overused because it’s popular with teens and tweens. Furthermore I am in NOOOOO position to be criticising anyone, and certainly not the good lady herself. I was more interested in reader’s reactions to the use of a love triangle in urban fantasy – and the overwhelming majority were tired of seeing this and wanted something different. It also chimed with something I’d read the previous week about relationships in TV serial dramas – Shane Ritchie pointed out that it had taken over a year for Kat and Alfie to have their first kiss, yet nowadays, TV is all about instant gratification, and drawn-out will-they/ won’t-they scenarios are few and far between.

I don’t currently have a love triangle in my WIP – there is a love interest that kindles during the novel, but also complications that would make a relationship difficult. As it’s currently written, there’s a kiss between the two about 3/4 of the way through the book, just before the beginning of the climax where the protag. and love interest/hero are torn apart on separate quests. On the back of the advice I read from other urban fantasy readers (and also, who’d have thunk it, Shane Ritchie!) I will now remove that kiss and follow the Kat and Alfie formula instead – gaining myself a subplot for the next few books that could go all manner of interesting ways.

And speaking of TV, two points to mention:

A final note about the Riley Pope series – they’re all now FREE on Smashwords, and always will be. The reason? Well, because they’re not traditionally published, and whilst they’ve been properly proofread by myself, they haven’t been under the eyes of an editor or anyone else with a professional eye, like traditionally published books are, so viewing this from the eyes of the reader, I decided it would only be right to now offer them for free.